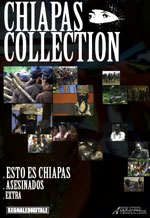 “The Chiapas Collection” consists in the one dvd edition of all video works by SEGNALE DIGITALE and A FEW STEPS PRODUCTIONS, from the middle nineties until 2000, pointed on analysis and testimonies about the realization and denunciation of the bad life conditions for indios of Chiapas, Mexico.

“Esto es Chiapas“, a documentary which has been realised between 1995 and 1997, springs out of two long and difficult research and documentation trips in Chiapas and reports the overstanding of 1994, showing points of view, problems, real life and motivations of the indios from Chiapas, live and directly by the voices of the indios themselves, by the interviews of the writer Oscar Oliva and Juan Banuelos , and also by the testimonies of EZLN commanders and Subcommander Marcos.

“Asesinados” is a documentation and protestation video and at the same time a strong act of denounciation towards the State of Mexico, his representatives and executors in the Chiapas area.

“Let’s talk about politics” is an experimental movie produced in Mexico in 1996 with the partecipation of Steven Brown; it shows an hypothetical and metaphorical meeting between the opposing delegations of the ethnic group of the indios, and the improbable representatives of an hypothetic south american country.