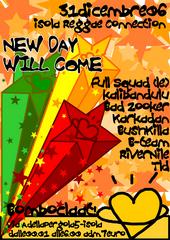 Great evening and great Dancehall New Year 2007 Pergola with PergolaMove – AwhoDem collaboration with SEGNALE DIGITALE. “New day will come ‘and’ the result of the evening, recorded by SEGNALE DIGITALE in Bomboclat @ Pergola, is presented and made ​​available thanks to the work of PergolaMove and AwhoDem Productions and Bushkilla.

The CD and ‘consists of 5 sets of fifteen minutes each sound systems that have actively participated in the management of children’s dancehall Bomboclat @ Pergola in the 2006/2007 season, that’ Bushkilla with Roddi Karkadan, Giadama with Rivernile and TLD and Kalimbandulu, all supported by the tireless work of DVDs Bushkilla, the true soul of reggae music programming in Bomboclat! Maximum respect!

Bushkilla Sound System was founded in 2002 by the union of two defectors’ s excellence in the world of dancehall Italian Davide DVD-founding member of the G-ItalSound Milan and Luca also the original founder of GRAMIGNA Sound System in Rome.

The experience and knowledge they bring with them both and share in the birth of Bushkilla, they immediately bring to light both in Milan, where the Backyard Pergola and then push reggae vibes until dawn, and in the national scene with contacts and collaborations. Bushkillah to life together with TLD to a series of events at the Shipyard hosting many emerging sound of that time, including SoundsGood & Mono Nikitaman, BassFiMass, GoldenBass ……. and began working with Giadama and Roddi of Rivernile Sound System .

It ‘important to note and remember the experience and the tireless work of DVDs Bushkilla, who along with many others like Mirko TLD and Giadama of Rivernile has made possible many nights full of reggae and good vibes in recent years in Pergola confronting the many problems and dangers – even at the level staff- that the management of a community center requires these days in Milan-Babylonia in 2007.