LOOKING BACK AT ANGER : A Retrospective Programme on Kenneth Anger’s Work 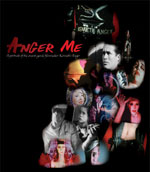 From 10.11.2007 to13.11.2007 the Film Museum-Musée du Cinema di Brussels hosted an international seminar about the Kenneth Anger work and the films, “LOOKING BACK AT ANGER : A Retrospective Programme on Kenneth Anger’s Work”, with the presence of Kenneth Anger and Edwin Carels, Pip Chodorov, Robert Haller, Jean-Claude Lebensztejn and Anna Powell.

“Looking Back at Anger”, a rare programme including Kenneth Anger’s recent video work, Elio Gelmini’s ANGER ME documentary portrait of the filmmaker, produced da SEGNALE DIGITALE, as well as works by Stan Brakhage and Marie Menken where Anger is present, either physically or as a source of inspiration, has been preceded by an international seminar on Anger’s oeuvre moderated by Muriel Andrin (Université Libre de Bruxelles).

“LOOKING BACK AT ANGER” is a co-production between Argos, Koninklijk Filmarchief / Cinémathèque Royale and MuHK-media, in collaboration with SCC (Service de Culture Cinématographique asbl) and the VDFC (Vlaamse Dienst voor Filmcultuur vzw)

ARGOS is a Brussels based centre for art and media that was founded in 1989. Over the years the organisation has developed from a distributor of artists’ video and film into a broader art centre incorporating also functions as exhibitions, screenings and events, production, conservation and preservation, publishing and the development of a public media library.The entire Looking Back at Anger programme has been screened a second time at MuHKA_media, Antwerpen in December 2007, more info one : www.muhka.be/film.