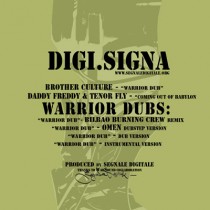 DADDY FREDDY & TENOR FLY joins the BROTHER CULTURE version, published on BASSCULTURE VOL. 2, to produce a “burning” version on the Murder Riddim, who inaugurates the new music edition “DIGI.SIGNA“, looking in a specific way for all lovers of sounds and atmospheres that belong to the dub, dubstep and jungle European and English scene.

So ‘to close the year out”, SEGNALE DIGITALE presents for “DIGI.SIGNA“, a new digital collection, “WARRIOR DUBS“, based on Murder Riddim, with two vocal versions, 1 remix, along with dub versions and instrumental version.

The two vocal version from BROTHER CULTURE and DADDY FREDDY & TENOR FLY in combination on the riddim have been joined by the excellent remix in “dub style” produced by BILBAO BURNING CREW on the BROTHER CULTURE version, an instrumental version, a dub version and the version of dubstep originally produced by Nah “theOmen” for BASSCULTURE VOL. 2, published in digital version in the middle of 2012 and who has produced a lot of interest in uk and europe.