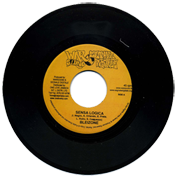 WARSOUND aka Dj War & SEGNALE DIGITALE, carrying on a years long collaboration, join their forces for a new musical production featuring the best of new Salento’s realities, even joined by one of the great veterans of the scene, Antonio “Treble” Lu Professore……listen!!!

WARSOUND & SEGNALE DIGITALE present 3 different 45 rpms based on the same riddim, ” Play on”, made by Mighty Cez, on which sing, in 5 different versions, Lu Marra, Mikelino, Bleizone, Cocco and Treble LuProfessore…..the final mix is again by LuProfessore……satisfaction guaranteed………………listen again!

AUDIO FILES ON THE WEB:
At www.bleizone.splinder.com, thanks to Bleizone Sound System’s blog, is available an audiofile, produced by Dj Orlando, with all this production’s singles.

The first four signature production of ‘seed-planter’ Dj War, together with the SEGNALE DIGITALE collective, is a top test for the new Salento reggae scene, the three 7” which are beginning to be known throughout the peninsula. “Play On Riddim”, signed by Mighty Cez, emerging Brindisi producer based in Venice, immediately impresses for its wisely constructed version and easy adaptability to so many different metrics – robust and dynamic when needed – embellished with fancy percussion on a regular upbeat riff and horns in pure Studio One style.

When altering rhythms, one recalls the new Salento school of singers led by Treble, Lu Professore, in top form on the “Fanne Ca” grooves, with acute lyrics on questions that have no answers. Boom Boom Cilum is part of Lu Marra’s “Ganja War”, a clean vision of the market contradictions that crushes the magic herb, umpteenth confirmation of the state of grace of the most powerful and acclaimed singer in today’s Italian music scene.

The same theme is also performed in bashment key by the convincing Bleizone, although the best surprise comes from the emerging Mikelino, who in “Non ti stancare mai” builds some half Italian-half dialect significant lyrics, on original and incisive melodic lines around common subjects including those of Cocco Ventrejanca’s “Pija Coscienza”, the last episode of the complete series.
Andrea Mi