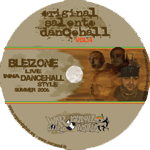 Original Salento Dancehall Vol. 4 consists of some audio segments of the dancehall night also organized at club Mediterraneo, on the coast road of S.Foca near Lecce, to celebrate the presentation of the KLANDESTIN cd with Bleizone Sound System at the control, in collaboration with Warsound and SEGNALE DIGITALE.

The cd presents a wide musical selection by Dj Botulino and Dj Orlando together with Ciccio and BMC right on form, vocal performances by Lumarra, Cocco, Lidi Waza, Speakertex, Kadim, BMC again, plus the live performance of some tracks from the KLANDESTIN cd and many more Salento singers checking up the open mic in the dancehall.

Another musical selection matching with the speech by Ciccio brings the cd cd to a successful end and well represents a dancehall performance of Bleizone Sound System!!!

The following file is available for download in mp3 format:
OriginalSalentoDancehall vol.4