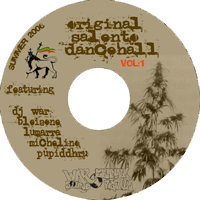 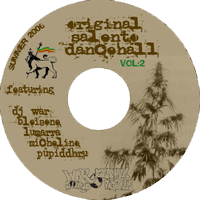 Original Salento Dancehall VOL1/2 is the two cds recorded sound report of a dancehall organized by WARSOUND from Dj War in collaboration with SEGNALE DIGITALE  at club Mediterraneo, on the coast road of S.Foca near Lecce the 10th of August 2006, the italian St.Lawrence night.

During this show took also place the presentation of the 7 inches records on “Playon” riddim by Mighty Cez with the live performance of some among the main voices of the reggae movement in Salento. These two demo cds with more than seventy minutes each contain the show performed by Bleizone Sound System with Ciccio and BMC right on form and the live performance of the singers Lumarra and Michelino, together with friends from other italian soundsystems, bringing fire on the sound wave produced by Dj War, veteran of italian dancehalls, in combination with the young vocal talent Pupiddhru, the “Milan Champion” coming from Salento.

Some thousands people took part in the event, which had his set at club Mediterraneo on the coast road of S.Foca near Lecce, making it last until morning light and letting it become one of the Salento Dancehalls to be remembered also in the next years!!! Peace and Irie Vibes for everyone until the new day comes!!!!!

The following files are available for download in mp3 format: