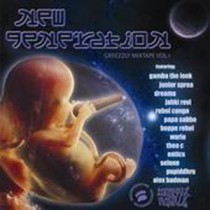 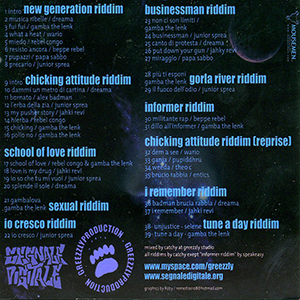 GREEZZLY Productions and SEGNALE DIGITALE present a new CDmix, “NEW GENERATION“, collecting 38 tracks that have been mixed on 10 different riddims produced by GREEZZLY in collaboration with Gamba the Lenk, Junior Sprea, Rebel Congo, Jahki Revi, Dreama, Papa Sabbo and many others.

The riddims range from rub-a-dub to roots to rock-steady and even ska and rap-posse. Mixing and production were executed by Catchy, who also produced the CD titled “Xtreme entertainment” and who collaborated with SEGNALE DIGITALE and WARSOUND on “War Signals“. At the mike are singers that, together with their sound systems, are part of a new reggae generation that sings and produces original music. Although most singers are from the scene in Milano, like GambaTheLenk, and young talent like Junior Sprea and Dreama, Papa Sabbo, Pupiddhru, Wario, Alex Badman, Beppe Rebel, Entics, Selene and Theo C from Nati Dread, the CD features international guests like Rebel Congo from Spain and Jahki Revi, born in La Spezia but now living in Barcelona.