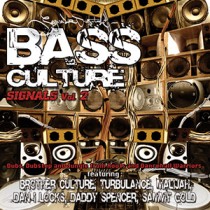 SEGNALE DIGITALE presents another preview of its forthcoming productions with a few tracks from the compilation “BASS CULTURE” vol. 2 which will become available both as a digital download and on CD in the second half of 2011.

“BASS CULTURE” is a series of albums focused on sound and riddims that range from digital dub to roots dubstep to ragga-jungle, with contributions of Italian singers but most of all from the European and international scene.

Three songs from volume 2 are made available here for preview by SEGNALE DIGITALE. The songs have been produced in Barcelona in the new “SegnaleDigitale Studio” and are performed by two singers very well known in the European circuit, Mandingo Warrior from Sweden and the veteran of many wars, the great Brother Culture from Brixton, UK.

The riddim “Murder” was produced by one of the youngest and most promising producers of the Italian scene, OMEN. All final versions have been produced and mixed by SEGNALE DIGITALE.

TO BUY:
SEGNALE DIGITALE offers the opportunity to buy directly the versions on CD with a delivery service to your door. For more info or to buy this product .......click here

To purchase digital versions of this production, SEGNALE DIGITALE offers the opportunity to buy a MP3 or WAV file to 44.1khz, 16 bit stereo, from our web store, SD STORE ONLINE