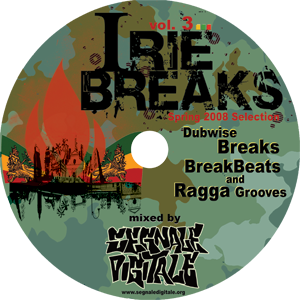 “IrieBreaks Volume 3” is a new chapter of the CD demos mixed in Segnale Digitale’s studio in Milano.

As the preceding volumes, this CD presents some of the most groundbreaking sounds of the international Break scene in one hour of “urban underground music” produced by a wide range of Crews, Djs and Mcs like DubPistols, Tayo, Roots Manuva and Jungle Brothers, with songs of new and well established producers like TennorFly, Dynamite MC, Secta Chamaleon e Mc Manic, Beat Assasins, Dj DefKline and Red Polo, and historic tracks of legendary pioneers of the scene like RaggaTwins.

“IrieBreaks Volume 3” is a snapshot of an electronic scene which is in constant evolution and at the same time keeps an eye on its cultural roots that are reinterpreted according to new styles and versions, interconnecting urban breaks, hiphop, ragga, reggae and dub style.

AUDIO FILES ON THE WEB: